I’m working with the awesome Greg Bahlman on the cover for Space Rogues 7: A Guy Walks Into a Bar and he sent over a quick sketch to show the blocking he’s thinking about.

I toyed with a landed Ghost for the cover of Space Rogues 5: So This is Earth? but it was a bit cartoony (Because I did myself with stock assets) and when I polled readers, they weren’t feelin’ it.

But for Book 7 it made sense for the cover to show the Ghost in one of her most frequent haunts, a spaceport on the planet Fury; dingy dirtball that it is. Book 7 actually gives us a glimpse of life on Fury beyond the spaceport, market and the space Friday’s the crew hangs out in.

If you haven’t yet, you can pre-order book 7 now, it releases October 6th.

I’ve hit the point in my writing where I’m comfortable in branching out. Not too far out as you’ll see, but outside the Space Rogues universe.

I’ve only written two scenes so far, but I have most of this story in my head, and the rest, like all my work, I’ll discover as I go.

Jace is our hero. He’s in a universe where humanity has expanded to the stars, settling planets, causing wars, doing all the stuff we’re good at here on Earth but on a cosmic scale.

I’m exploring his background as I go, but know already that he’s a loner. He’s long since gotten over having people in his life.

Jace nodded, “Yeah, I had to lay low after that ass-kicking I gave to the Delphino brothers.”
Lucas grunted, “Uh, they kicked your ass. Your eye is still a little purple.” The bartender looked around, “They shipped out huh?”
Jace touched his left eye and frowned, “Yeah, Rudy told me their ship departed last night.” Lucas sighed and walked over to a woman who had sat down at the far end of the bar.
“Are you Jace Caruso?” A voice asked from behind him.
Jace didn’t look up, “No.”
He looked over his shoulder at a middle-aged man in what looked like an expensive suit. It took the man a few seconds before the man said, “Uh, your business manager said I’d find you here, and described you, in detail.”
Jace shrugged, “He’s a liar.”
“So, you are Jace Caruso?” The man pressed.
Jace exhaled and spun on his barstool, “What do you want? I have a lovely night of getting drunk and making questionable decisions ahead of me.”
The businessman cleared his throat, “Um yes, well I need your help. I’m Sylvester Kline, I represent ReliefCorp. We’d like to hire you.”
Jace looked around. He leaned over to look behind the businessman for the candid vidcast crew that surely was lurking nearby, “Uh what? Why would you want to me to be a relief worker? Nothing in my life would make anyone think that was a thing I’d excel at.”
From the other end of the bar, Lucas said, “Yeah he’s pretty selfish.” Jace looked down the length of the bar and flipped him off. Lucas added, “And lazy.” The bartender smirked.
The man cleared his throat, “I, no.” He shook his head, “We don’t want you as a relief worker. We need you to rescue them, actually.”
Jace turned back to the businessman, “I’m sorry, what? Rescue them? The aid workers?”
The man pushed Jace aside to set a data tablet on the bar. The screen came to life showing a data file for a planet, Mariposa.
“Mariposa?” Jace asked, “The bloody civil war in progress Mariposa?”
Kline looked from the tablet to Jace, “Well yes, currently. ReliefCorp has had an aid station set up in the lower highlands outside the capital for almost five years. The Imperial supported government has been making strides in solidifying their control over the planet. Our camp was helping those affected by the fighting.”

So that’s part of the opening of Jace Caruso: Space Loner (Very much not the title, but what I have now)

I’m still planning to keep (more or less) to my Space Rogues release schedule, and just mix in my new series and see how it goes.

The crew of the Ghost often finds themselves on the bad side of someone, whether it’s pirates, mega-corporations or powerful politicians. Sometimes it goes better than others.

The Ghost is standing where they left her. The two hover vans that brought the work crew are still parked near the starboard engine nacelle.
Wil is out of breath by the time they get close enough to the ship to see the first body. A quilant man is sprawled at the foot of the cargo ramp.
“Oh dren.” Cynthia swears as she kneels to check the being. She looks at her friend and shakes her head once. The three of them draw their sidearms and walk up the ramp slowly. Zephyr is in the lead. At the top of the ramp are two more of the work crew, a Quilant and a Trollack.
They find another body in the crew lounge, this one still alive, barely. The work crew team lead, the Trenbal woman. Orange blood is pooling around her. Her dinosaur-like face is twisted in pain.
Wil rushes over, dropping to his knees, “Don’t move, we’ll get help.” He looks up at Zephyr, “Check medbay!”
The Palorian woman darts past Wil and opens the hatch to the small medical compartment. She turns, “Empty.”
Wil scoops the wounded woman up and rushes her two the medbay. A bloody hand reaches up and grabs Wil’s shoulder, “It was… Crimson Sun.. Took your people.”

I’m sure things will work out though, right? I mean maybe they’ll just give Bennie back. 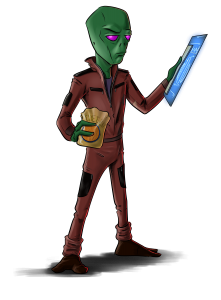 I know, this isn’t the first time I’ve posted about cover updates. The (of countless) upside of indie publishing is being agile. 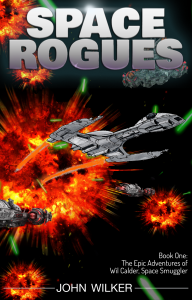 I love the Ghost! Greg did an amazing job of capturing her. But my initial cover updates simply replaced the old version of the Ghost with Greg’s. I love(d) those covers. The Ghost, in space, over a planet or fighting a monster spaceship. Most weren’t very dynamic.

That is (slowly) changing. Book One is the first. What do you think?

Some common knowledge in cover design is to capture a moment from the book. Book Two did that best. I wanted to bring the rest of the books in the series up to that standard.

Another bit of “common knowledge” in cover design is to fit the genre. While I think the previous cover fit the genre of Science Fiction overall, I don’t think it did perfectly. I mean there’s a spaceship on the cover, so “Scifi” is pretty well addressed. However showing the Ghost in flight, fighting, I think says “Action-adventure Scifi” much more clearly.

I just changed the cover last week so we’ll see if it leads to any better sales.

Maxim is the tactical officer aboard the Ghost. He’s Zephyr’s Significant other and the team stoic.

As a Peackeeper his last assignment was a intelligence analyst and operative.

Maxim is fun to write because he is truly that strong and silent type, but he’s incredibly competent. When he speaks the team listens and takes note.

He also is a massive fan of bacon.

Once Dan Voltz did an amazing job at capturing the crew!

Want to see me live and in person? I'm very personable and some say … END_OF_DOCUMENT_TOKEN_TO_BE_REPLACED