I clearly remember when I heard about Four Square (FS). My reaction was ‘meh’

I figured I’d wait it out until the fad wore off. That is until I went to WWDC. I imagine it was much the same at SXSW, the right mix of people to initiate a chain reaction. We were out at one of the too many competing parties, every one had it. I figured I’d join in. 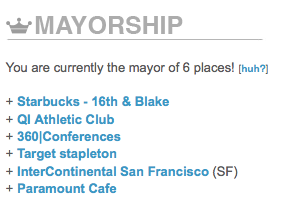 I racked up some serious points and badges thanks to the nightlife of WWDC, and as you can see, I’m still mayor of the Intercontinental… guess they don’t get many developer/social media types.

Then I came home, where I work out of my home office… my Four Square awesomeness quickly declined except at my gym and my house (Yeah cheating, but screw you, cubie, going to lunch every day, blah blah) where I reign supreme.

What really keeps me interested in Four Square, and even brightkite is the awesome outside the phone potential. I want my starbucks to give the mayor a free coffee (Frapaccino please). I want my neighborhood bar (where Dave and I are in a cold war for mayorship) half off drinks, or a free drink, something.In the brighkite world, I want to check in and see that where I am is running a Brightkite special, or maybe not where I am, but the place next door.

Where FS excels is that it identifies the losers (cough) people who frequent a place. Rewards them for doing so with points and meaningless badges, that can’t even be printed out! What if they got a burger instead!

This techcrunch article is exactly what I’m talking about. Ideally Brightkite will get there first, sorry FS, I gotta go with the home team. I definitely think whoever can start cementing these relationships first, will be hard to unseat, and FS already has a model. There’s no need to discount to all users, though that’s awesome, just give the mayor something great! Everyone will see, and want to be mayor, and guess how you do that? Be the one to visit a place the most. Win Win.

I had heard of the Fiesta movement (which to me sounds like a bowel movement after Mexican food, but whatever) from Jeremy. While I’m not a fan of Ford vehicles in the slightest I applauded their efforts to do more than just throw TV commercials at us. I think a ‘Mustang Movement’ woulda been cooler. I mean a free Fiesta? Really? I guss if you had no car, that’s a step up, but otherwise….

Then RJ twittered this article

The one piece that really hit home and kinda (in my head) screamed disingenuous, was Scott Monty saying

“As far as mechanical difficulties, let’s let common sense prevail,” he said. “If you were driving one of our cars as part of this program, wouldn’t you call for assistance first, rather than writing a blog post?”

Uh so you hope social media will move Fiestas but hope that people won’t use it when their Fiesta breaks down? It’s 2009 Scott, you as well as anyone should realize that 1. many people will twitter before calling for assistance, and 2. As soon as they’re done with the call for assistance, and waiting for a tow, they’ll use their iPhone to blog from the drivers seat, about their broke down Fiesta.

It just kinda hit me that, as progressive as Ford seems to be, they’re still a big company hoping that “common sense” prevails when it’s time to say something bad about their product. Hoping that the “agents” (People who’ve been given free Fiesta’s (a 47.99 value)) will not bite the hand that feeds them, so to speak.

“We’ve done a lot of war gaming and we’re prepared for a number of scenarios,” Monty told Wired.com. “Again, we’re looking for their feedback and input on the vehicle — they’re testing the vehicle as much as they’re building buzz about it, and we want to know how to make it the best possible car.”

To paraphrase, “We want their feedback publicly via youTube, Facebook and Twitter about how much they love their cars, but if they have problems, we hope they’ll call us for assistance rather than blog about it.”

Mad props to Scott and Ford for the effort, but in my mind still a ways off of being a really truly, first class citizen in social media. But hey, they’re doing it so they’ll get there before Chrysler, and that is worth something. What exactly, I’m not sure.

I wrote this after lunch on Monday.

Another freakishly awesome day in Denver! I’m sitting in the main hang out area (long foyer along the two break out rooms) with the sun beating on my back, reflecting on my MB Air’s glossy screen right into my face. It’s like those metal tanning things from the 60’s and 70’s

So far Defrag has been an awesome event, as advertised for sure. A few of the sessions have been a bit too lofty for me, but some have really rocked. I’m looking forward to more! What I find interesting so far is I haven’t taken a single note, like I would at a tech conference. It seems for me it’s more about just absorbing information in more general terms, than scribbling notes frantically as a speaker rambles on. It’s quite refreshing. The short form factor (30 Minute sessions) makes it almost like an Ignite, minus the auto advancing slides. It’s weird to have no “passing” period between sessions, so it’s kinda like a race to get your crap together and get to the next room if you’re changing rooms.

Typical conference problems, are typically happening. Wifi is sketchy, though remarkably not crappy. Kudo’s to Eric. I believe it’s impossible to have 100% fail free wireless internet, though at it’s worst, I’ve only lost my connection a few times, for a very short period, and only had laggy-ness (technical term) a few times too.

The topics around social media are very interesting, it’s good to see so much attention being given to SM topics, especially in the enterprise. Those guys definitely need it for the most part. I’m very interested in reducing the barriers between people (community) and things (companies), so seeing Enterprise take more of an interest in social media, is very promising.

Want to see me live and in person? I'm very personable and some say … END_OF_DOCUMENT_TOKEN_TO_BE_REPLACED